How it all started

(This is my own translation of the first topic I published on the blog, the 5th of September, 2010 – original french version here.)

This blog is born on my wish to share, shamelessly, my feelings about reading mangas, watching anime and other stuff, at each step of my discoveries. I am 40 years old, and it’s only three or four years since I started being interested in these subjects.

My knowledge about anime & manga use to be close to zero. I thought I knew, but knew nothing at all. Not so far in the past, I believed that anime & manga was only crap, a kind of teensploitation for young and unculturated couch potatoes, addicted to this French TV show  of the 80/90′s, « Club Dorothée » [This needs an explanation : "Club Dorothée" was a very popular TV show for kids, broadcast on French channel TF1 between 1987 and 1997, and the first of its kind to be mostly based upon anime such as Dragon Ball, Saint Seiya, Sailor Moon, Hokuto no Ken, etc - it has a gain a cult status for French otakus, but not for me, see below...]. I didn’t believe manga could be compared with our western european tradition of comics, with authors like Hergé, Jacques Tardi, Hugo Pratt or Moëbius. I hadn’t a better opinion about Japanese anime : static, cheap, poorly drawn, violent, stupid, excessive…

What made me change my mind? 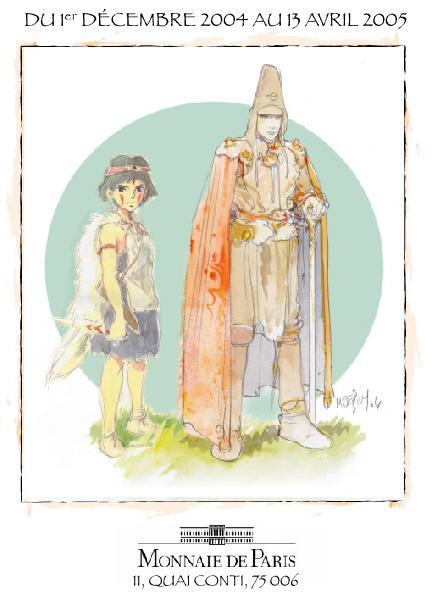 I started to reconsider my point of view in 2000, when I discovered Miyazaki’s anime My Neighbour Totoro in a parisian theatre ; then came Spirited Away (2002), Castle in the Sky (2003) and others. For the first time, I noticed that japanese anime was not just about giant robot fights and neverending lolita love stories. I saw nice drawings and designs, characters with personality, and beautiful stories. To learn more about Miyazaki’s work, I read his manga Nausicaä of the Valley of the Wind, and heard that Miyazaki and Moëbius have influenced each other.

The next step was Cowboy Bebop. I came across this anime while randomly changing channels on the TV in a motel room (I do not have TV at home anymore). What caught my attention was the opening, with the nice design and fantastic jazzy music by Yoko Kanno and the Seatbelts. I put down the remote control and watch the entire episode.

I was trapped. I did something I never thought possible before : I watched the entire series from the first until the 26th episode. But more than this, I changed my mind about the anime style, for example the camera angles, or the exaggerated physical proportions, such as large eyes, big hair, typical facial expressions and super-deformed. After all, these elements are just part of a language, and what really counts is the story built upon it. And to be honest, every kind of comics (manga, U.S.comics, european comics) has its masterpieces, and also its razzies. [At this point, don't expect me to give you any names. Not now. Maybe later, if we get close. Or under torture. Or, if we get close under torture.]

Still, I didn’t become an otaku yet, not even a great anime & manga fan. But I was ready to go further. The movies  Akira, Ghost in the shell, Metropolis, Steamboy interested me in different ways.

The second anime series I watched entirely was Ecaflowne. The story was interesting, and clever enough  to pay attention until the final episode, despite the neverending chatter (even when they fight, they just can’t stop talking) and silly love affairs. I especially liked the depiction of the world of Escaflowne, the environment and the history, a mix of science-fiction and heroic fantasy.

While looking for information about Escaflowne on the net, I noticed that it was often compared to another series, I never heard about before : Neon Genesis Evangelion. It was in summer 2008, I had plenty of time (temporary jobless), I was at home and not in the mood for following the Tour de France. So, let’s not die stupid, and let’s see… 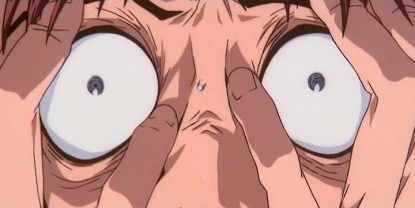 I saw the light. It may sound weird, but I had to wait until the two final episodes (the original ending) to understand how different it was from everything I ever watched before, and to fall in love with an anime series. At the beginning, I was close to give up, thinking : ok, this is the usual mecha series with emo kid trying to save the world, but not finding the way to go out with the pretty girl with blue hair. But as the plot was slowly revealed, I understood Evangelion was much more than this. Definitely not the usual hero, Shinji’s incapacity to live and have a normal relationship with others made my interest growing. I feared a happy ending, but the dark side of the story and the adult way it was told convinced me I was watching something very special.

The original ending was a real shock, but in the good sense. Change in the design, loss of quality in the drawing, the shape of it was a perfect match with the message. One thing that fascinated me, is the number of unanswered questions. This ending was changing everything I thought clear and understood, and the meaning of it all. For the first time, I had been watching not only an anime TV series, but a real masterpiece, in its own way. Later I watched the alternative endings, Death & Rebirth then The End of Evangelion, and my opinion got even stronger.

This is when I decided to join a french Eva-fan community, called Negenerv, the number #1 french-speaking website about Evangelion, and the folks there welcomed me so friendly, I never left. Soon it appeared that my topics on the Negenerv forum could be used as a basis to a blog, that was not my first intention, but I launched it. I gave it the name of my personal topic on the forum: Chroniques d’un newbie, i.e. the newbie’s chronicles.

Newbie I was, newbie I stay, for I continue to learn step by step about anime, mangas, and this is what I want to share with you.

So,
Welcome,
Let’s build something together…