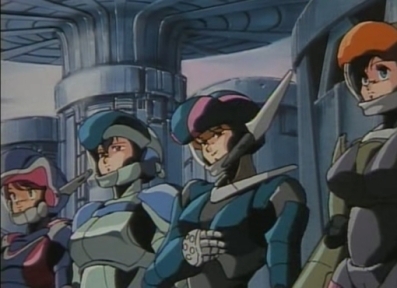 You like anime with girls, or mechas, or girls in mechas saving the world? I do. And Bubblegum Crisis is one of the best of the kind. Wait… You don’t heard of it before? Ok, I’ll do the presentation.

Bubblegum Crisis goes back to 1987, when most of you readers weren’t even born… But you have to know that the first OVA got enough success, mostly in the U.S., to generate  its own universe with sequels, prequels, remakes, mangas, comics, websites and all the fandom stuff. Now it’s considered as a cyberpunk classic, and a milestone in anime history.

The story :
Tokyo was destroyed by a gigantic earthquake in 2025.  A new city was rebuild on its ruins: Megatokyo, using  bio-cybernetics, a new technology developed on monopol by the GENOM company. The huge and mighty GENOM produces boomers, a new breed of cyborgs based on biological elements, including a brain, a heart and a blood circulatory system. Though, boomers are considered as robots, and are not supposed to have a personality.

Boomers are the slaves of humans : they are used for difficult or dangerous tasks, such as mining, cleaning the streets, working in factories,  public buildings and works… Boomers are also employed as servants, shop assistants, waiters, security guards, and even… as prostitutes. In this case, boomers have specific body apparence, of course. The problem is, they are under the unique control of GENOM. And, sometimes, boomers turn mad…

When it happens, boomers often attack humans. A special police unit, called A.D. Police, is supposed to arrest, or eradicate, mad boomers. But without sufficiant equipments and troops, A.D. Police operations are often ineffective. Note that A.D. has its own sponsor, and it’s… GENOM…

Fortunately, there’s still a force able to fight against mad boomers. This force is known as the Knight Sabers, a group of four anonymous young women in combat armour. Who they are, where they come from, the reason of their crusade against mad boomers, all this remains a mystery. But the fact is that they are very efficient and skilled. GENOM and A.D. Police put forward as an excuse that the Knight Sabers are illegal, so they try to arrest them.

At the beginning of the first episode, we learn that the Knight Sabers are four ordinary girls, whose leader is Syllia Stingray, daughter of the famous scientist who cerated the first generation of boomers. Professor Stingray died in 2025, during the earthquake…  Officially, Syllia Stingray owns a successfull fashion line and shop in town, but she inherited her father’s secret laboratory, and started the Knights Sabers, recruiting (and paying) three other girls :
- Priss Asagari, an underground rock singer, with strong personality ;
- Linna Yamazaki, a gymnast and aerobics coach ;
- and Nene Romanova, a radio operator at A.D. Police headquarters, and a very skilled hacker.
Then begins an intense struggle between the Knight Sabers and the mad boomers, with A.D. Police and GENOM as referees…

My point of view :
This is reaaaally good stuff.
What else?

Well, Bubblegum Crisis 2032 has almost eveything I expect from an a cyberpunk anime : a hung up story with many developments, characters with deep and complex personality, and a cold, dark, violent atmosphere. Some clues let us know that it is clearly inspired by the movie Blade Runner; for example, Priss Asagari’s rock band is called « Priss and the Replicants« . Most of the scenes are set in the deep of the night, in gloomy alleys or empty highways, with artificial light. Although there is sometimes light comedy or humourous dialogs, the OVA is for mature audience. Violent fights leaving dead bodies on the floor, adult themes such as genetics, politics, society & economy… and philosophical questionning about the meaning of life, which can be sum up in one sentence : what does human really mean? In fact, the main subject is the same as Blade Runner’s : do boomers have a soul?

Beside the cool atmosphere and design, I appreciated : the quality of the animation, more than correct for the time being, also the production, close to an animated movie standard. Character design may look a little old-fashioned, but we are in 1987, almost the quarter of a century from here. I personally like this vintage charm.

But if there is one point that puts Bubblegum Crisis 2032 above other productions, it’s clearly the soundtrack. Except for the recurring opening, the epitome of 80′s rock nostalgia (see the video below), each episode has its own different soundtrack, made of original instrumental or rock songs, with loads of heavy guitars, glorious vocals and vintage keyboards.

(sorry for the poor quality)

Behind the four Knight Sabers, Bubblegum Crisis 2032 has also an interesting cast of secondary (male) characters. The main three of them are the recurrent :
- Leon McLeod, a hard-boiled supercop, looks like Dirty Harry but he’s fascinated by Priss, and becomes more complex as the episodes pass ;
- Daley Wong, another inspector at the A.D. Police, he’s gay and often jokes about his relationship with his partner, Leon ;
- Mackie, (not me but) Syllia’s young brother, skilled in mechanics, he drives the Knight Saber’s van, and prepares their equipment, but his first motivation is to watch the girls while they change clothes and put on their armours. Well, for the first time I share my nickname with an anime character, and he’s a sex maniac…

Each episode of the OVA is a short story, with a beginning and a clonclusion, but the whole 8 episodes reveal a general plot, step by step. Progressively, we learn about Syllia’s past, the motivation of each Knight Saber, the GENOM secret plans and internal conflicts, the true role of A.D. Police, etc… but what boomers really are remains a mystery. The turning point comes with episode 5 and 6, the closest to Blade Runner’s main subject : do boomers have a conscience, or not? have they feelings? Do they fear death?

As a conclusion, you may have guessed I was really seduced and impressed by Bubblegum Crisis 2032, and I can only recommand it to you.

Some screenshots,  taken from episodes 1 to 6, to give you an idea : 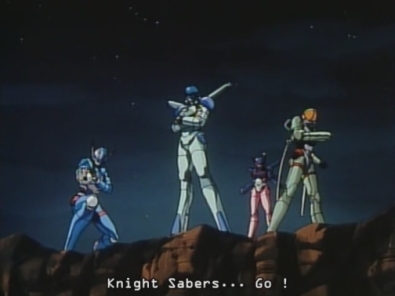 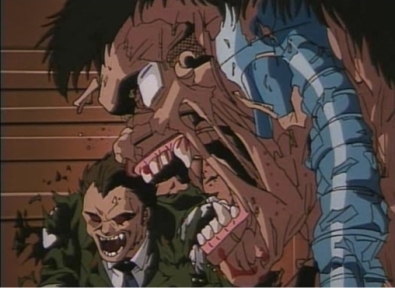 Angry boomers are so predictable. 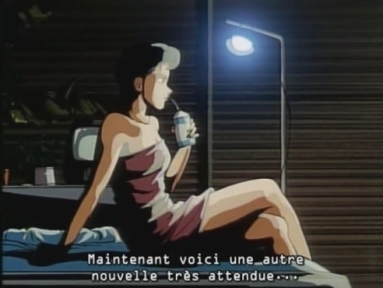 Ain't this picture make you think about "Nine 1/2 weeks" ? 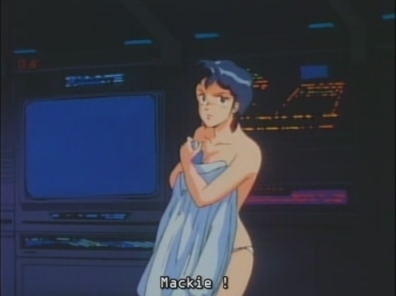 Sorry it's not my fault.